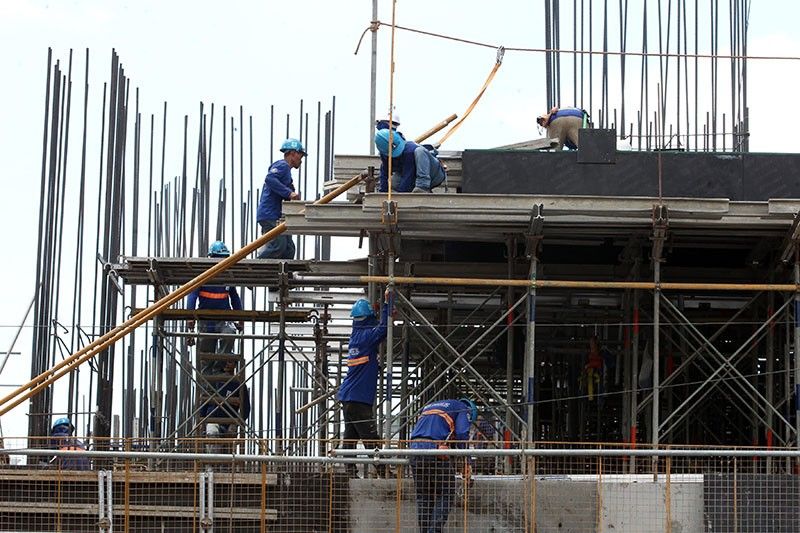 MANILA, Philippines — A resumption of construction activities as the economy emerged from a coronavirus-induced shutdown helped propel government infrastructure spending in June, although the recovery is unlikely to be sustained as some areas remained under looser lockdown.

Capital outlays jumped 38.9% year-on-year to P77.5 billion in June, when Metro Manila and other key urban areas were lifted out of stringent lockdowns, figures released by the budget department on Monday showed. The year-on-year growth was the fastest so far this year.

The monthly uptick was enough to swing state infrastructure back to the positive territory after three months of year-on-year slump. As of first half, capital outlays inched up 0.8% annually to P380.6 billion, also beating the P372-billion target for the period, albeit this goal was lowered last May, following pandemic disruptions.

“Spending was propelled by various nationwide projects of the Department of Public Works and Highways such as construction, preventive maintenance, upgrading, widening, repair and rehabilitation of roads…, bridges, and flood control structures,” the budget agency said in a report.

The military’s purchase of equipment under its modernization program as well as contractor payments from the education department likewise contributed to the bigger outlays last June.

The bounce-back in infrastructure spending bodes well for the Duterte administration’s recovery plan from the coronavirus pandemic, which banks on the centerpiece “Build, Build, Build” agenda to salvage the economy from a recession in the first half of the year.

But on the ground, contractors are not so optimistic the rebound will be protected from outbreak uncertainties, not with the return of Metro Manila, Laguna, Cavite, Bulacan, Rizal to a stricter modified enhanced community quarantine last August 4 until August 18. President Rodrigo Duterte is expected to announce an easing of those restrictions beginning Wednesday, but even this is unlikely to be of any help.

“Compliance to strict guidelines and protocols in addition to cost and expenses associated to protective measures and medical tests continue to affect the business,” Ibarra Paulino, executive director at Philippine Constructors Association, an industry group which claims to account for 80% of state infrastructure projects, said in a text message.

“I personally do not see a drastic pick-up of the construction industry — not in the immediate future due to the pandemic we are still experiencing. The rest of the year is geared mainly towards survival,” Ibarra added.

After MECQ, what’s next?

Of the June outlays, P62.8 billion was spent directly by the national government on infrastructure projects. The amount rose 44.5% annually, budget data showed.

The remaining P14.7 billion was funneled to towns, cities and municipalities, to build infrastructure, up 23% year-on-year. A minimal P100 million was given to state corporations as equity for big-ticket projects.

“Large and medium scale infrastructure projects may be held up due to constraints tied to social distancing,” said Nicholas Antonio Mapa, senior economist at ING Bank in Manila.

“Much-needed capital machinery and raw materials have not been brought into the country, as evidenced by the recent trade numbers showing a substantial drop off in these imports,” he added.

This creates a problem on the overall business environment. Chris Nelson, executive director of the British Chamber of Commerce in the Philippines, another industry group, recently asked the Duterte government to consider a bigger stimulus, something larger than the P162 billion currently proposed under Bayanihan to Recover As One, to resuscitate the economy.

“I think the overall consideration of our members is how can they plan their business, what can they do to go forward, what support can they anticipate the government would be doing to the economy and then on a more, what I would say, trade and investments (topics), what is going to be the planning overall,” Nelson said in an Aug. 7 interview with CNN Philippines.

For its part, the budget department said some with budgets for right-of-way up for release pending submission of complete documents, infrastructure spending will continue to pick up. “These are, therefore, expected to drive government spending further for the remainder of the year,” the agency said.